WATCH “Talking & Tracking the Tropics: The Science Behind the Season”

WATCH “Preparing for the Storm”

* & many storm names were the fastest to get to their respective letter (only Arthur, Bertha & Dolly were not)

* Iota marked the 5th straight year (7 Cat. 5′s in all) with at least one Cat. 5 over the Atlantic Basin - a feat never matched previously. Remarkably - there was at least one U.S. landfall each month from May through Nov. 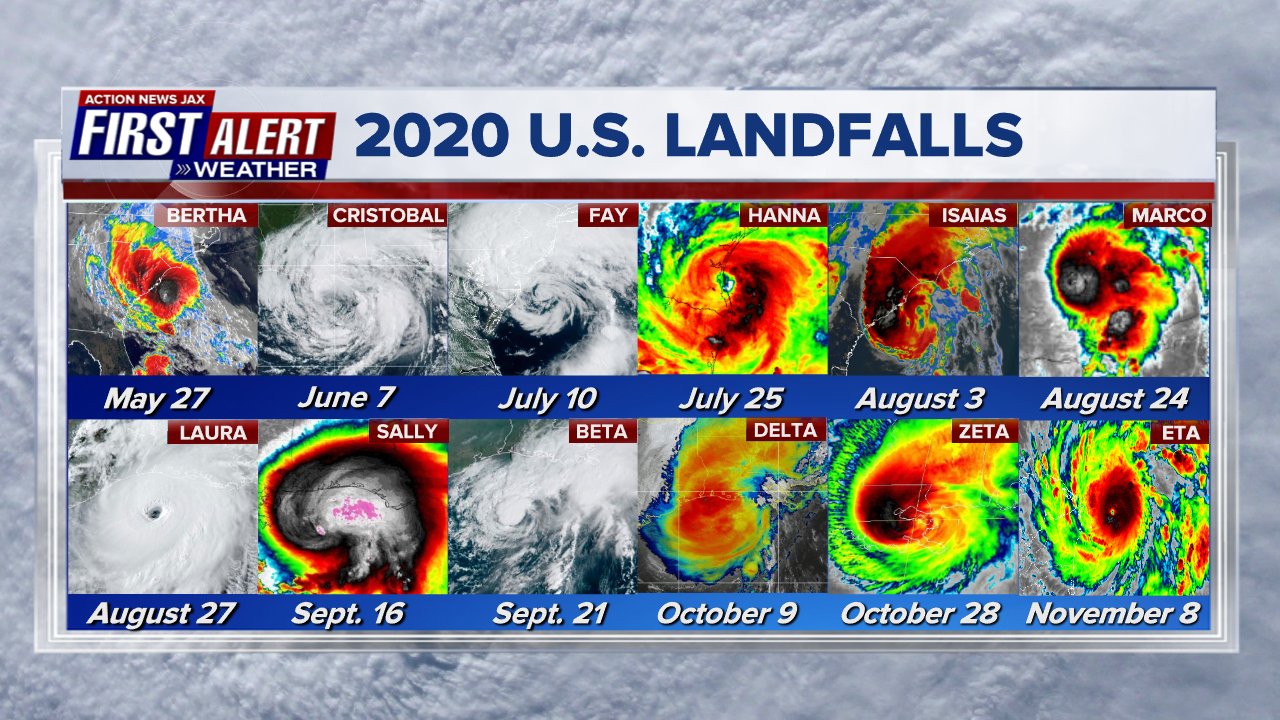 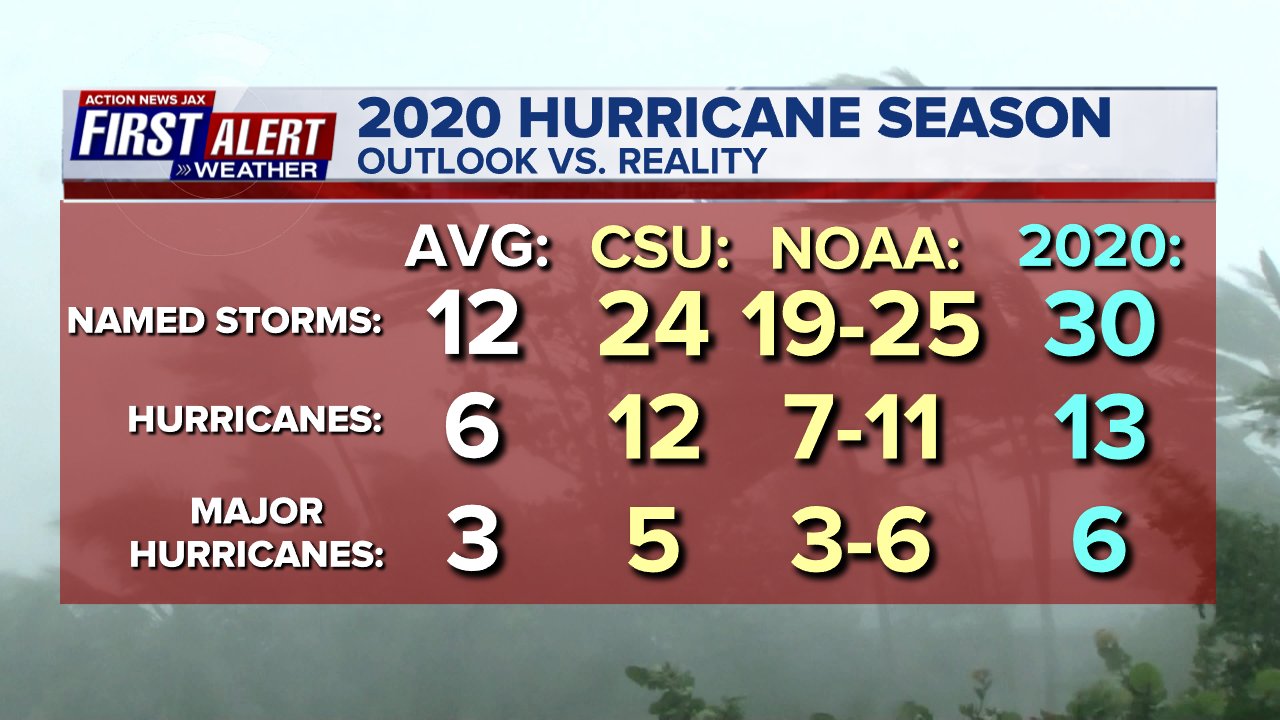 The two tables below are from Dr. Phil Klotzbach, Colorado State University: 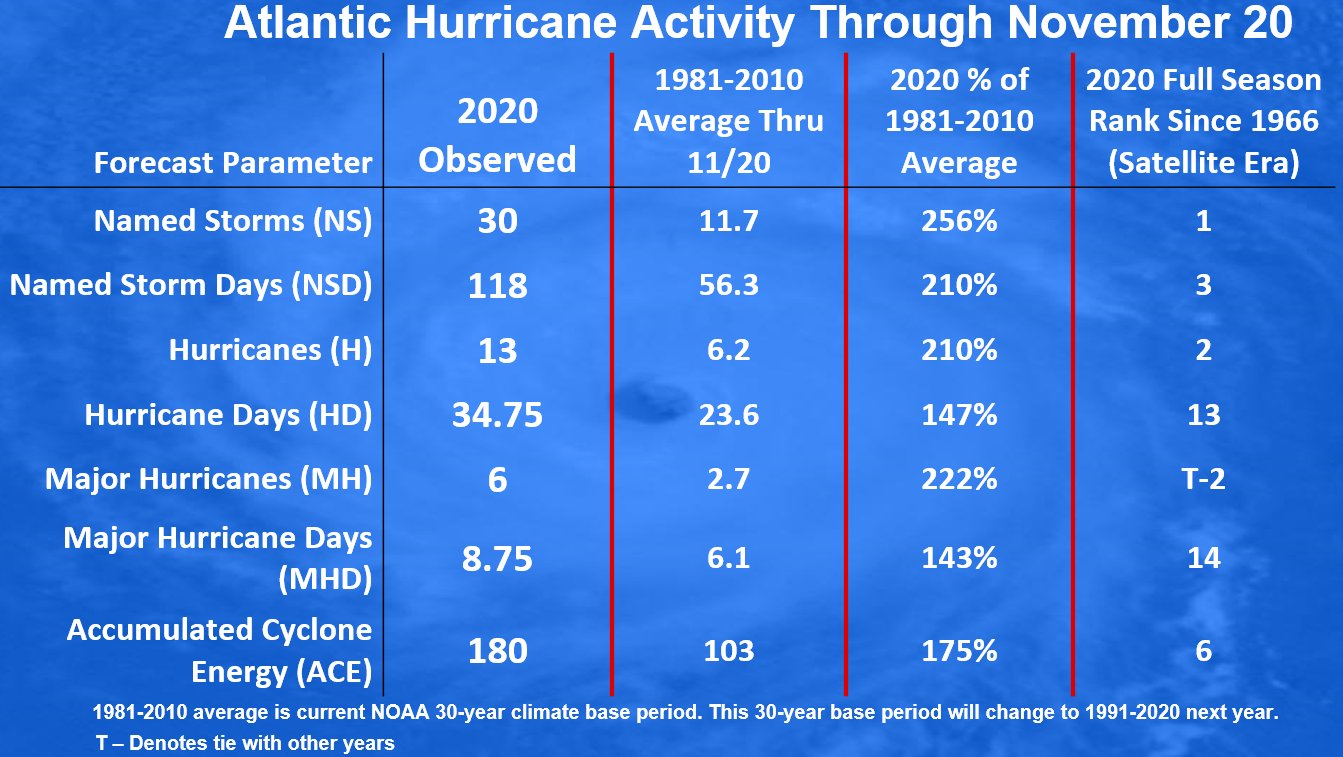 Another remarkable stat/map: the entire U.S. coastline from Texas to Florida to Maine was under a tropical storm/hurricane &/or storm surge watch or warning in 2020!...... 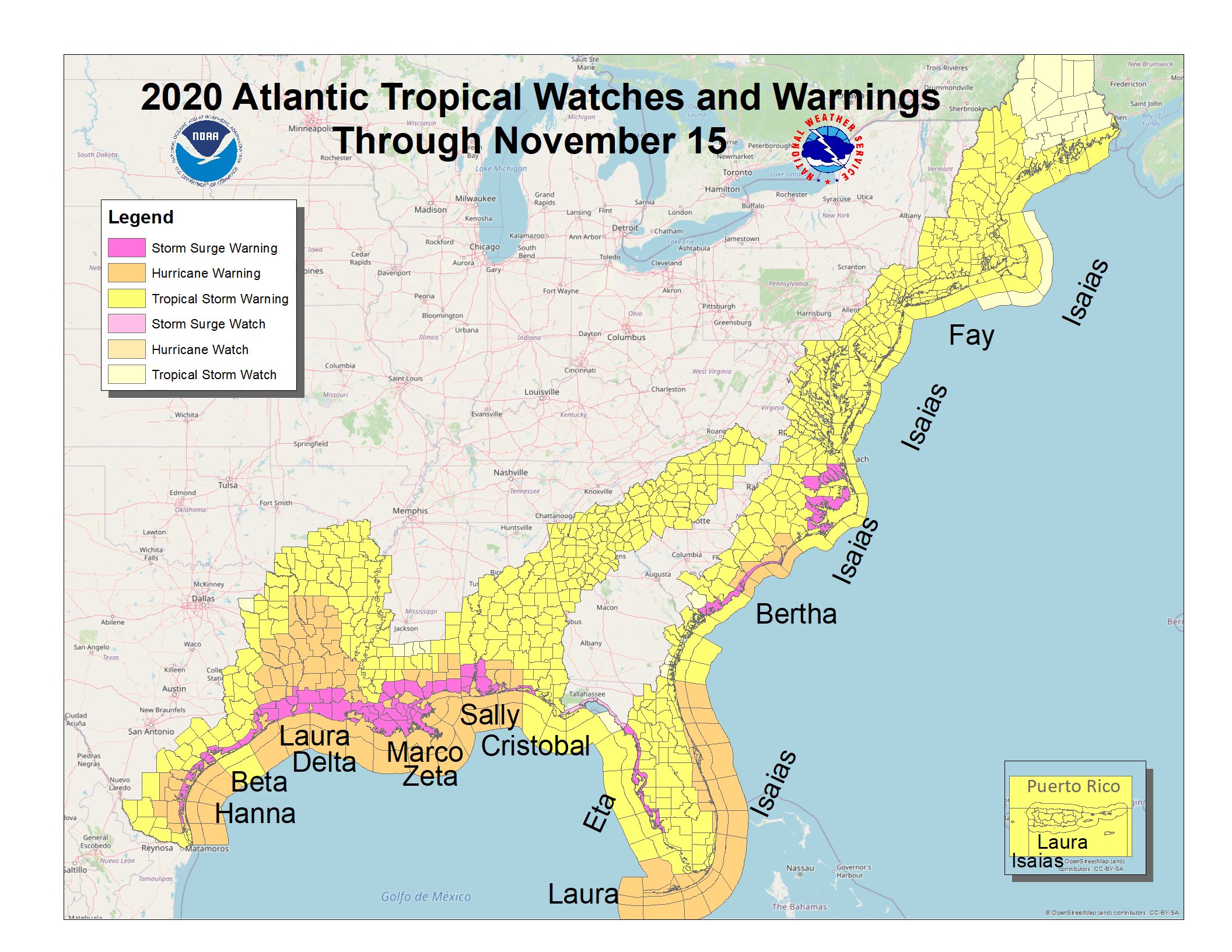 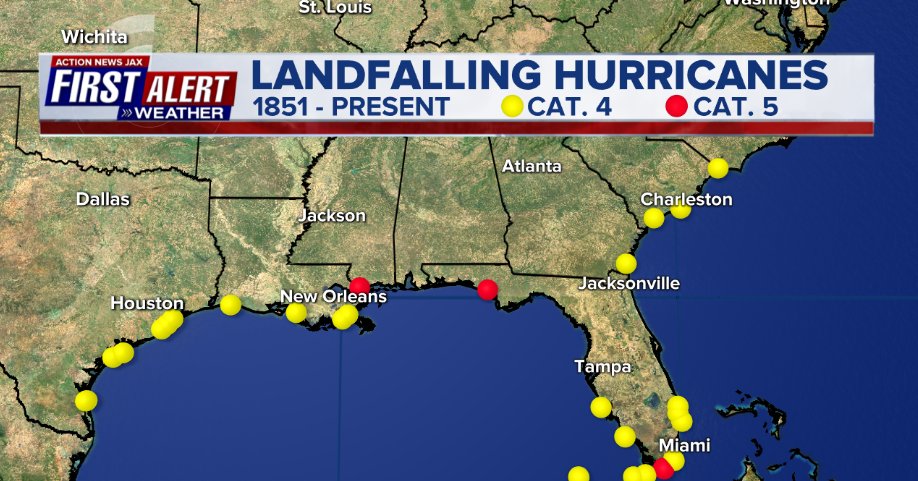 16th: An early start to the season as tropical storm “Arthur” formed east of Jacksonville with the last advisory issued on the 19th over the W. Atlantic

27th: A quick to develop “Bertha” became a tropical storm upon approach to Charleston, SC & moved inland with the last advisory issued the same day.

22nd: Subtropical depression forms east of Chesapeake Bay & briefly becomes “Dolly” on the 23rd with the last advisory on the 24th.

9th: Tropical storm “Fay” develops off the N. Carolina coast & moves north with a landfall on the 10th near Atlantic City, NJ ... the last advisory on the 11th.

29th: Tropical storm “Isaias” develops over the NE Caribbean & becomes a hurricane on the 30th north of the Dominican Republic.

23rd: “Marco” goes hurricane then back to a tropical storm with landfall near the mouth of the Mississippi on the 24th... last advisory on the 25th

SEPTEMBER (most named storms to ever develop in a single month - 10!) 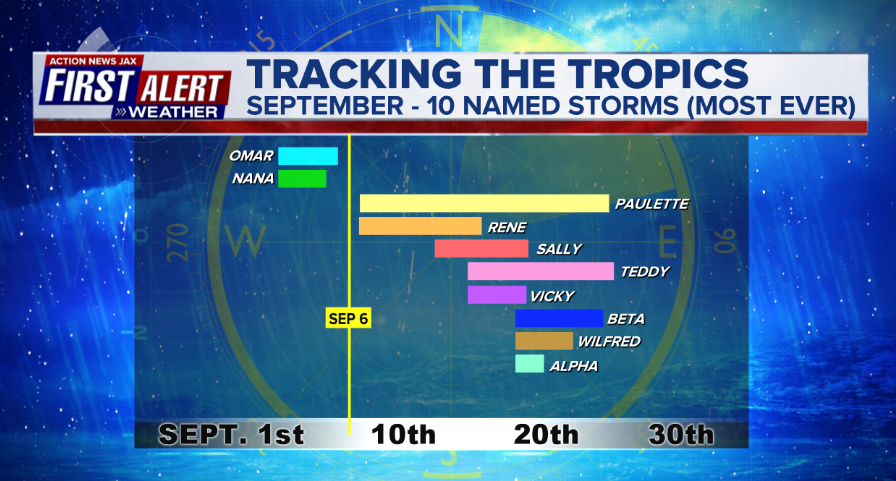 1st: Tropical storm “Nana” forms over the Central Caribbean... tropical storm “Omar” over the W. Atlantic... Nana makes landfall as a t.s. on the coast of Belize on the 3rd... last Omar advisory over the Atlantic on the 5th

8th: T.S. “Eta” landfall on the central Cuba coast early in the morning.... in the Fl. Keys in the evening 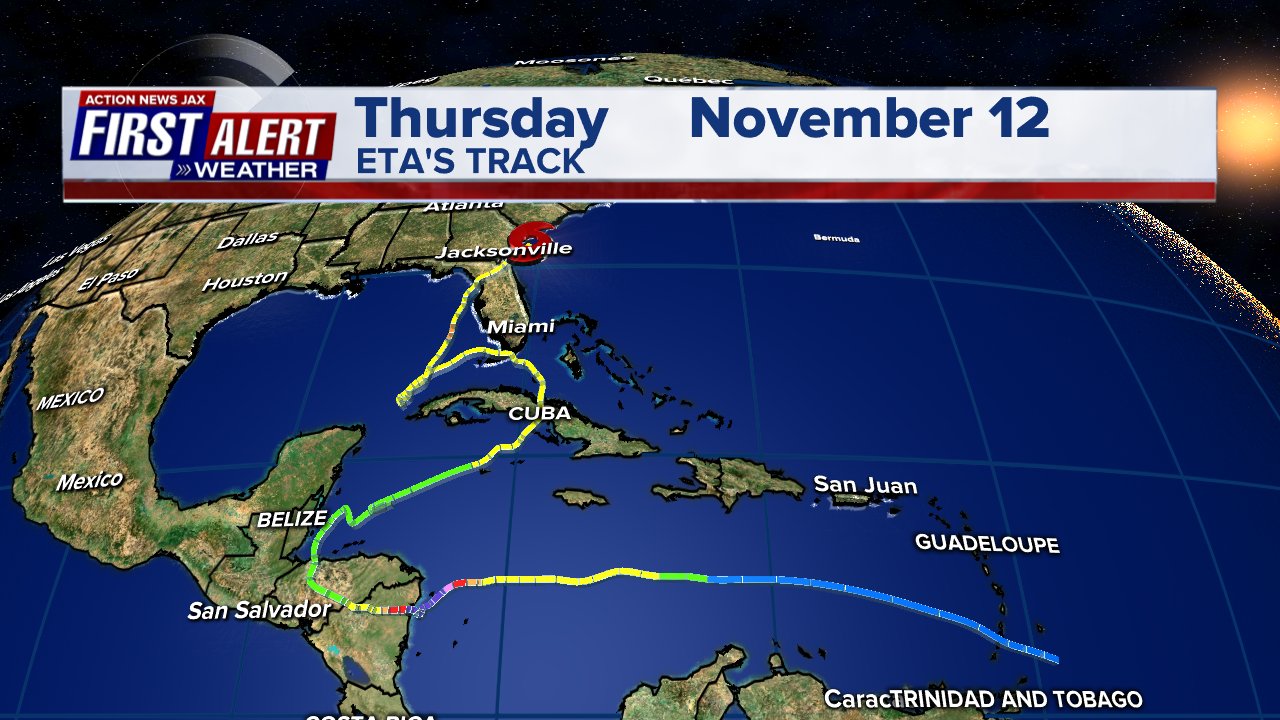 While not producing any damage in Jacksonville/NE Fl./SE Ga., tropical storm Eta was one of just a handful of named storms that have moved directly over Duval Co. within the last 20 years: 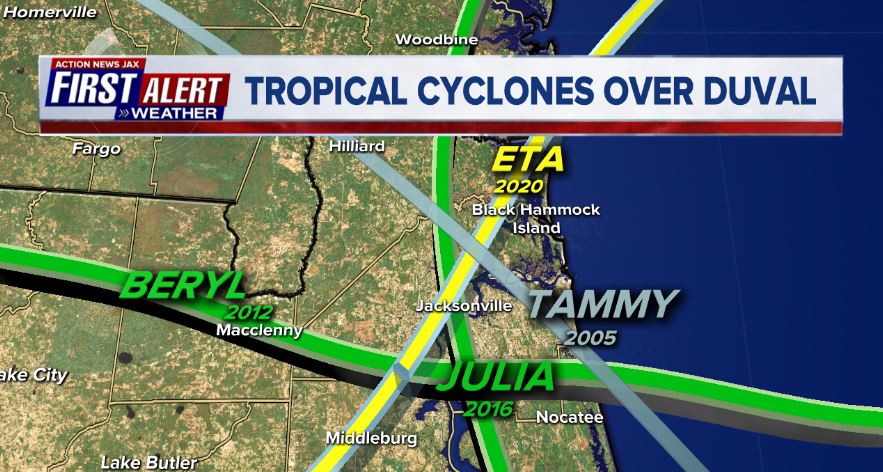 2020 names..... “Wilfred” was the last name on the Atlantic list (names are picked at random by the World Meteorological Organization... repeat every 6 years... historic storms are retired (Florence & Michael in ’18 & Dorian is certain to be retired from the ’19 list). Interesting side note: the last six of the names on the ’20 list had never been used. So it’s on to the Greek alphabet. "Kappa” is next... the first time the Greek alphabet has been used since 2005 (total of 28 named storms using 6 Greek letter names in ’05 [there was one unnamed storm). Theta broke the record for the most Atlantic storms in a single season on record at 29.

Surface analysis of the Gulf:

Listen to all of the latest interviews from JMN on News 104.5 WOKV!

Biden brings no relief to tensions between US and China

Everything you love about wokv.com and more! Tap on any of the buttons below to download our app.

Enable our Skill today to listen live at home on your Alexa Devices!

You may be offline. Please check your connection and try again using the Retry button.